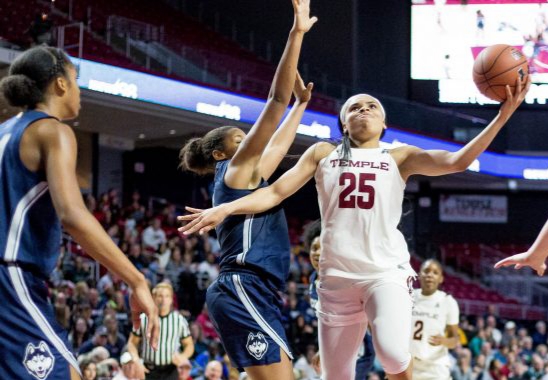 Olivia Nelson-Ododa had a career-high 15 points, 10 rebounds and five blocks to lead No. 4 Huskies to an 83-54 win over Temple on Sunday at the Liacouras Center in front of 3,278 for an American Athletic Conference game opener for both teams.

“When we all blend together we make great music. Now it’s like we’re all tuning up our instruments. When it’s going good, it’s good.” Auriemma commented after the game.

The game was being played so early in the schedule because Connecticut has four non-conference games against No. 1 Oregon, No. 2 Baylor, No. 6 South Carolina and Tennessee after Jan. 1 as well as an exhibition game against the U.S. national team on Jan.27. That made finding dates to play during the normal part of the conference schedule very challenging.

UConn is 105-0 in the American Athletic in regular-season play and 121-0 overall in the conference the Huskies are leaving at the end of the season to rejoin the Big East Conference.

In my second year, I’m learning to be more physical and active on the boards. Last year it was a huge learning curve for me with the speed of the game and how athletic everyone is on this level. But if I challenge myself and win on the hustle plays and alter shots in the paint then I know we have a great chance of winning the game.” UConn center Ododa said.

Temple (3-2) made it a game got within 10 points in the third quarter to push UConn, but the Huskies were unfazed and squirted out to a 15-2 run including a nice spin move for a layup by guard Christyn Williams to seal the game for Connecticut.

“Last couple of years when we played them, we were playing pretty good basketball then we play them and it’s demoralizing. I felt like maybe get it out of the way early and don’t have that same kind of effect. We’ll see.” Temple coach Tonya Cardoza said.

With a short jumper in the third quarter, Davis became the 25th player in Temple history to reach 1,000 points.