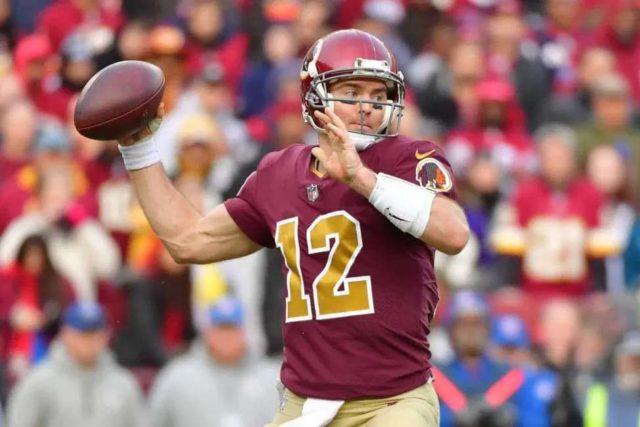 Daniel Jones who was selected sixth overall in the 2019 NFL Draft had impressive numbers as a rookie last year, but also some turnover issues as well. Hence come offensive coordinator Jason Garrett and veteran backup Colt McCoy to the rescue.

The Big Blue are steadily building up and solidifying their roster lineup. Each coaches meeting seems like it is hitting the right notes for this season and they are strengthening their rosters with new acquisitions from free agency.

McCoy, 33, is more of what the Giants are looking for in a backup role with his on the field leadership. The former University of Texas star has been a reliable backup and a frequent starter in the league for over a decade.

“Playing in the NFC East, you get a pretty good feel for players and coaches,” McCoy said on Sirius XM Rdio. “I just looked at it as an opportunity to play for a Giants team that has a new coach and a new system and a lot of guys that I’ve played against, but I don’t really know personally.”

McCoy spent the last six years primarily as a backup with the Washington Redskins. Originally, he was a third-round pick by the Cleveland Browns in 2010, where he made 21 of his 28 career starts. He is definitely a suitable backup who can come in from the sidelines and be very productive for the G-Men.

“I met Daniel just in pregame when we played them a couple times last year,” McCoy told reporters in April. “I know him more as a quarterback because playing in the same division you get to watch their tape week in and week out because we are playing all the same opponents across the league. I thought he played very well as a rookie last year. His future is bright, his ceiling is high and he seems like a really great person. He’s obviously very lucky to have a guy like Eli in the quarterback room. A guy I really look up to and respect as a guy who did it right his whole career. I think Daniel knows the importance of a healthy quarterback room.

With McCoy and Daniels in the same meeting rooms, there is so much information that Daniels can absorb and translate to the field with McCoy being there to help the second-year quarterback through some growing pains as a signal-caller.

We will definitely find out the value McCoy will bring when the Giants get together in the summer at MetLife Stadium.