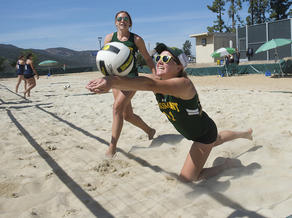 El Cajon — The athletic program at Grossmont College has been awarded the 2015-16 Chet DeVore Trophy. The award is the highest honor given by the Pacific Coast Athletic Conference, which consists of 10 community colleges in the region.

Teams in the conference are awarded points for placements in conference and state competitions.

It is the second time in three years Grossmont has taken the top honor.

Donivan Mathis, interim associate dean of athletics, said the student athletes, who balance classes, practice, travel schedules and jobs to compete, are preparing themselves to succeed in the future.

About 400 students participate in Grossmont’s 10 women’s and seven men’s teams.

The trophy, first awarded for the 2009-10 academic year, represents the member college with the most successful men’s and women’s intercollegiate athletic program annually.

The award is named for the late Chester S. “Chet” DeVore, the former Southwestern College president/superintendent who was the conference’s founding commissioner in 1982. As Southwestern’s chief executive, DeVore oversaw the development and expansion of facilities for 21 years. The Chula Vista campus’s DeVore Stadium, which was part of a $25 million renovation paid for by Proposition R funds two years ago, is named for him.