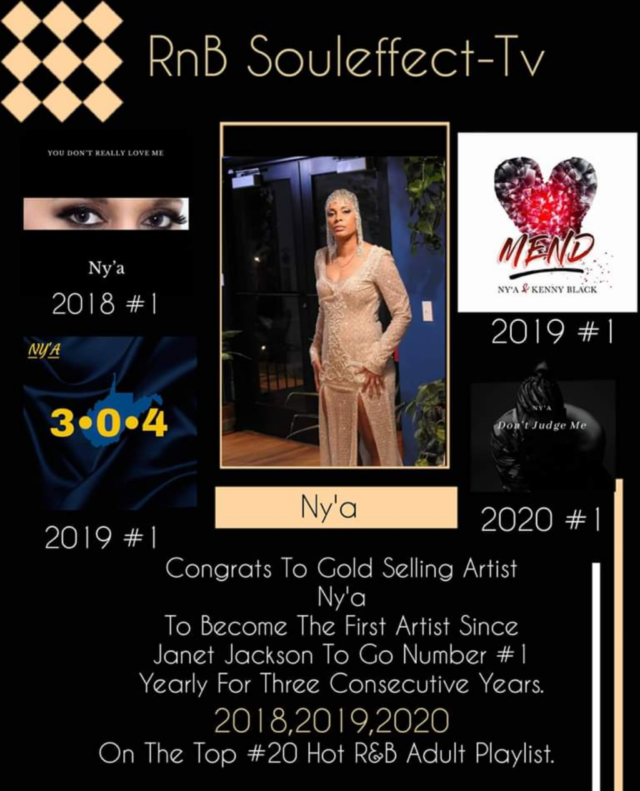 Independent R&B sensation Ny’a is hitting the music scene with a vengeance and creating a status of her own gracing both national and international platforms world-wide. With an ageless vibe and grown woman swagger, Ny’a has been formulating her mark and making her presence known for some time. Since the release of her late 90’s debut album “Embrace” reaching certified Gold with over 400,000 copies sold followed by the hit remix single “Alright” collaboration with none other than NYC’s own rapper Chubb Rock being featured on the movie soundtrack “Rock Da Houze” written, directed and produced by former BET’s Teen Summit producer Lathan Hodge, Ny’a has been taking care of business.

Her follow-up track “I Don’t Want You” was yet another successful smash single with the music video ranking #3 on the top 20 international video charts. This Rahway, New Jersey native has climbed numerous Billboard rosters circulating European, African, and American media outlets such as BET, USA, and Star networks while rubbing elbows with some of the biggest names in the industry. Her third single “Take It to The Top” produced by Grammy Award producer Ken Johnston was a synergistic masterpiece with A-listers Grammy Award winner Sabrina Johnston and Latrice Varrett of the group Sounds of Blackness tying in that artistic flavor.

In 2015, after a fifteen-year hiatus, Ny’a returned to her passion for music teaming up with Grammy Nominated producer Kenny Black partnering under independent label Nap Vision and a year in the making recorded “You Don’t Know” an ol’ skool flavored track with a grown and sexy Mary J Blige feel rated #10 on DRT’s Top 50 R&B/Hip Hop Chart sharing with the likes of multiplatinum artists Beyonce, Rhianna, and Drake, in addition, being ranked #3 on the Euro and World Music Stage charts hitting 50 countries worldwide.

Ny’a kept finessing her melodic craft on back to back projects in 2017-2018 with heart-rending ballads “Mend” featuring Kenny Black skyrocketing at #1 on Spotify, “You Don’t Really Love Me” hitting #1 five consecutive weeks on the R&B Soul Effect chart and with the release of Grammy Nominated Album “Something For Everybody” embodying a savory mix of R&B and House laced club jams that’ll have everyone rocking to the beats. Her 2019 breakthrough came by way of honor winning R&B Soul Effect’s Independent Artist of The Year adding to Best Chart-Topping Artist, Best Music Video for “You Don’t Really Love Me” and Best R&B Album. Nya’s flamboyant versatility on “304” and “Spill It” shows she has no intentions of slowing down her grind. This independent trendsetter is a flawless ensemble of talent, flair, and impeccable genius.